Japan and Taiwan: wood and tools

Spring time in Taiwan is made of rainy and sunny weather, particularly the month of april. On saturdays my 15months old son and I are supposed to work outside. Well in fact he plays and runs everywhere, and I can't do anything but bits of planing or sawing. But the pouring rain forced us to change our plans.
So we decided to go out, and check out the local hardware and tool shops, I mean old store and not hardware supermarket. The first one we entered had a shelf in the back just behind the counter with lots of wooden planes.

My eyes open and I start asking the shop owner if I can have a look at his planes. At the back of the shelf, behind many other planes, I recognize the white phoenix blade that I own.
Tools 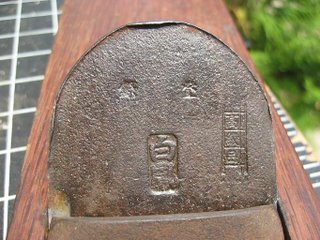 White phoenix jointer, Yamaguchi-san.
Produced about 20 to 30 years ago (together with a red phoenix). Some were exported to Taiwan.

The first thing I did after I got back home with the white phoenix was to sharpen the slightly chiped blade. It took a very keen edge. Steel is blue steel, and for old white phoenix iron is rentetsu. I haven't had the opportunity to test its edge retention over the long run: the jointer is set at a low angle, suitable for soft wood which I do not have much. It was used by a local (Taiwan) craftman on Taiwanese Juniper.

I decided to talk about this plane as an introduction, because it illustrates the intricate relationship that happened between Taiwanese and Japanese history as far as woodworking was concerned. A lot more could be said on other topics related to the occupation but I am not historian and lack the documentations to sustain a solid report.

The interesting thing about the white phoenix, is that, as I mention in the intorduction, it is still sold in Taiwan. The shop owner explained me that these blades were the eldest in his shop, and that his father was the dai maker. It is worth noting also that this Taiwanese dai maker used red oak.
I asked if other old blades were available, and when he crawled under the shelf and took back a big can with many blades, I was like a kid discovering a new interesting article. All the blades were made in Japan 30 to 40 years ago. The guy couldn't answer my questions regarding the type of steel or the name of the maker.
I will undoubtly pay other visits to this shop, and will probably make few purchases. This time I've only bought a blank of 20 years old red oak and an unusual type (because of its size) of spokeshave. 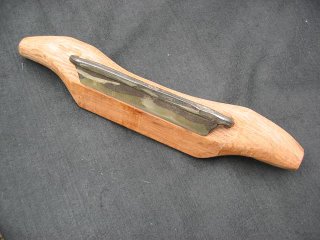 Taiwanese Juniper was praised by Japanese craftmen, particularly temple builder. A famous railroad track was build in the Ali mountain in central Taiwan for the purpose of exploiting the precious wood. The Yakushiji shrine for example, was rebuilt in the 1980s (achieved 1992) with Taiwanese Juniper. 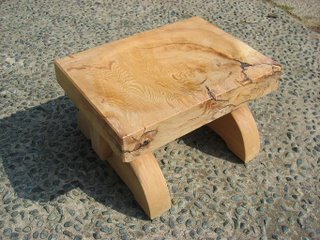 Small stool in Taiwanese Juniper. I chipped one of my chisel while making this.

The wood is now rare, and only to be found in rather small planks. It's not allowed to cut standing trees, but when a strong typhoon strikes the island, fallen trees are sought after in the mountain areas.

As I made an allusion in the "tool" section above, oak was used to make dais in Taiwan. It seems that only red oak was abailable, and it is now also a protected species of wood. 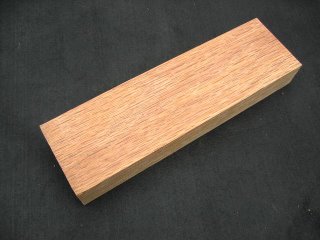 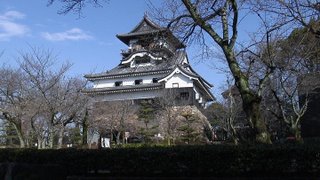 For the 10th anniversary of Kezuroukai, the main theme was to built a Dashi （山車）。Dashi is a kind of car made of wood, pulled and push by several personns. It is crafted with skills and can take up to one year to be completed by a small team.
The one build for this kezuroukai benefited from the help of 70 craftmen, all members of Kezuroukai.
A small team from the USA, Jay Van Arsdale and his fellow craftmen, also participated to an element of the dashi. I recommend the visit of the daiku dojo web site (see links).
The building was directed by Mr Sugimura （杉村さん）, temple builder and head of Kezuroukai. 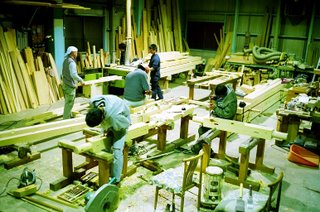 Workshop where parts of the Dashi were built:here are the main axis and frame structure.
(nikon S2, no flash, 35mm) 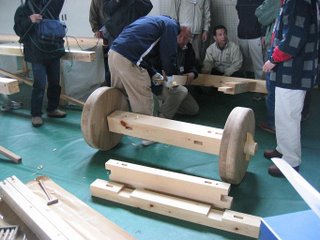 Morning before the first day meeting (18th of march 2006): assembly of the wheels and chassis. 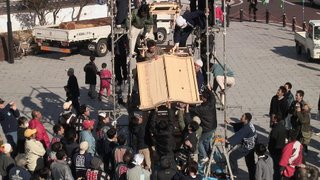 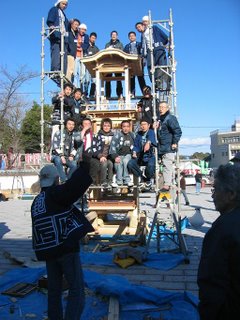 Other activities were also presented, such as the planing competition (with not only the goal to produce the finest shaving, but also to set the plane blade as fast as possible), metate (saw sharpener), using adze。。。 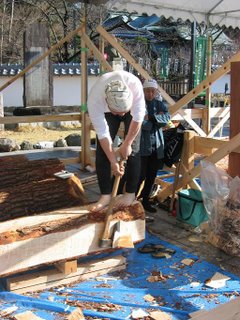 Skilled craftman using his ax, fearing not for his feet

Hello, I've been living in Taiwan since 2003. Amateur woodworker since I was kid, discovered the "hand tool" side of woodworking in Taiwan and Japan. I have a deep interest in human relationship and decided to share what I learn from life, people and books.